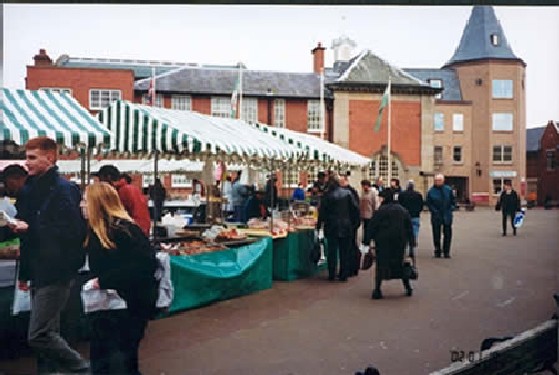 One of the more successful campaigns run by the BUAV was that of taking over shops on a short lease and stocking it with leaflets, pamphlets and posters to elicit support from passers by. This idea of Mabel's was highly successful and she travelled around the country overseeing similar schemes in many major cities.

She ran the first of these shops in Wrexham in 1909 and later opened similar shops in () and ().

Mabel Collins became an extremely well known anti vivisectionist and was interviewed in the press on a number of occasions.

Wrexham / Wrecsam is a large former industrial town, conurbation and principal area of Wales lying in north-eastern part of the country. It is situated between the first mountains of Wales and the lower Dee valley, close to the English border with Cheshire about 15 miles south of Chester (England). It is the main commercial, retail, educational and cultural centre in North Wales, and often termed 'The capital of North Wales'. In the 2001 census Wrexham had a population of 42,576, whereas the Wrexham urban area had a population of 63,084. It forms the centre of the wider Wrexham County Borough, which covers 50,500 hectares and has a population of over 130,000. These figures make Wrexham by far the largest urban area in Wales away from the south coast.

Prehistoric human activity in the area. This was revealed by the discovery of skeletal remains, known as ‘Brymbo Man’, in a Bronze Age burial at Brymbo in 1958.

Roman activity in Wrexham. Holt and Plas Coch were large farm settlements. The earliest mention of the town name, Wrexham appears in ‘The Pipe Roles’, as ‘the castle Wristleham’.

The first reference to .

Edward I visits as part of his conquest of .

The first reference to the establishment of a market and fair in Wrexham.

Charter to the burgesses of Holt. This is later confirmed by Elizabeth I conferring town status.

The Steeple of St Giles Parish Church was completed. It is now one of the seven wonders of .

Richard Gwyn, the Master and the first Welsh Martyr to the Papal Cause is persecuted and executed.

Wrexham suffers when one quarter of the town is destroyed by fire during the Civil War.

The Royalists are defeated at Rowton Moor, near and the Roundheads take over Wrexham.

The Father of non-conformism in , Morgan Llwyd is installed as the vicar of Wrexham. 1648 The infamous George ‘Hanging Judge’ Jeffreys is born in Wrexham. Judge Jeffreys became famous for his tough penalties during the Monmouth rebellion in the reign of Charles II.

Tanneries founded at Wrexham. The Cambrian Leather Works would later supply the leather for the binding of the 11th edition of the Encyclopaedia Britannica, which needed nearly a million skins!

The benefactor of , Elihu Yale, dies and is buried in .

A National Eisteddfod is held in Wrexham. This is to be the first of many.

The first , the Dispensary, is founded.

Town granted commission of the peace.

A large network of railways is completed.

The Football Association of is formed in the Wynnstay Arms, Wrexham.

The Official Headquarters of the Royal Welsh Fusiliers is established.

First lager brewery in is built at Wrexham by a German immigrant – Ferdinand Graesser.

The first purpose - built cinema in opens in Wrexham.

National Eisteddfod held in Rhos, it was interrupted to announce the end of World War II.

Freedom of the Borough is given to the Royal Welch Fusiliers.

Queen Elizabeth II visits Wrexham as part of her Coronation. Coronation Walk is named in honour of this.

The Town Twinning partnership with Kreis Iserlohm, , is inaugurated.

Richard Gwyn, the Master and the first Welsh Martyr to the Papal Cause is declared a Saint.

North East Wales Institute (NEWI) is founded including and Cartrefle.

Queen Elizabeth II visits as part of her Silver Jubilee.

The Duchess of opens the first phase of the .

Queen Elizabeth II visits Overton for the 700th anniversary of the Overton Charter.

The Duke of opens second phase of the .