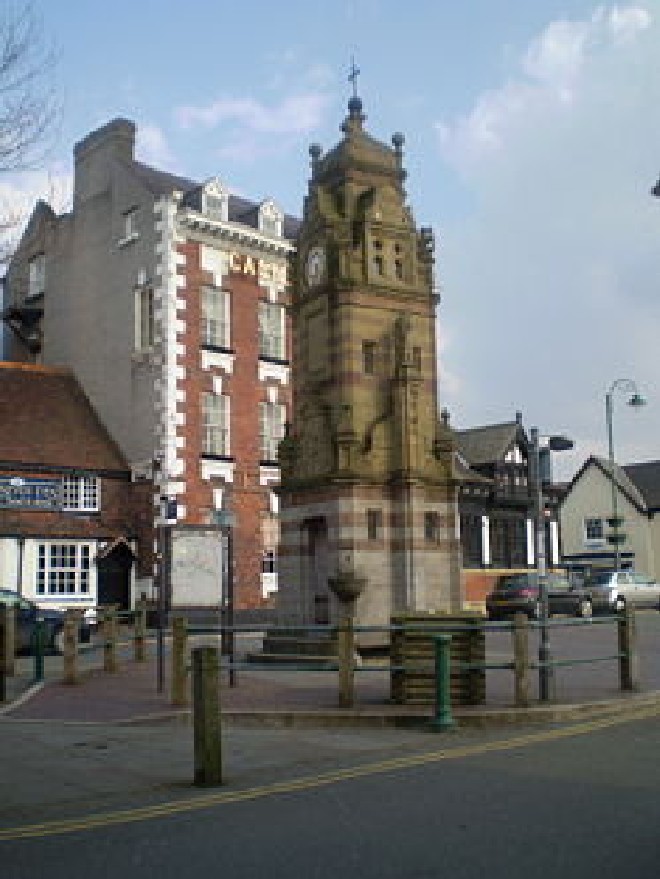 Ruthin / Rhuthun,is the county town of Denbighshire in North Wales situated at the junction of the trunk roads A494 (Queensferry - Mold - Ruthin - Corwen - Dolgellau) and A525 (Rhyl - Denbigh - Ruthin - Wrexham - Whitchurch - Stoke-on-Trent). The population at the 2001 census was 5,218

Ruthin is located around a hill in the southern part of the Vale of Clwyd - the older part of the town, the Castle and Saint Peter's Square are located on top of the hill, while many newer parts of the town are on the floodplain of the River Clwyd (which became painfully apparent on several occasions in the late 1990s -- new flood control works costing £3 million were inaugurated in autumn 2003).

The name 'Ruthin' comes from 'rudd' or red and 'din', the Welsh word for fort, and refers to the colour of the new red sandstone which forms the geologic basis of the area, and from which the castle was constructed in 1277-1284.

Ruthin is one of 's most prosperous towns. The quaint and picturesque vicinity and the large properties within a rural setting appeal to professionals who commute daily to , and in .

Little is known of the history of the town before construction of started in 1277. Construction was begun by Dafydd, the brother of prince Llywelyn ap Gruffydd, but he forfeited the castle when he rebelled against King Edward I with his brother; Edward's queen, Eleanor, was in residence in 1281, so the castle must have been habitable by then. The Marcher Lord, Reginald de Grey, Justiciar of , was given the Cantref (an administrative district) of Deffrencloyt (Dyffryn Clwyd, the Welsh for Vale of Clwyd), and his family ran the area for the next 226 years. The third Baron de Grey's land dispute with Owain Glyndwr triggered Glyndwr's rebellion against King Henry IV which began on St Matthew's Day (18 September) 1400, when Glyndwr burned Ruthin to the ground, reputedly leaving only the castle and a few other buildings standing.

A Ruthin native, Sir Thomas Exmewe was Lord Mayor of in 1517-18. His family home, Exmewe Hall, is now the town's branch of Barclays Bank, on . Adjacent is the half-timbered Old Court House (built in 1401), now a branch of the NatWest Bank, which features the remains of a gibbet last used to execute a Jesuit priest, Fr Charles Meehan who had the misfortune to be shipwrecked on the Welsh coast when Catholicism was equated with treason — Fr Meehan was hanged, drawn, and quartered in 1679.

In 1574 Dr Gabriel Goodman re-founded which had been originally founded in 1284 and is one of the oldest public schools in the . Dr Goodman's investment has been well-rewarded as Ruthin School has produced a Speaker of the House of Commons, several Masters of the Rolls, an Archbishop of York and many bishops, judges and knights. In 1590, Goodman also established Christ's Hospital for 12 poor persons around St. Peter's Church on the square, and he was also Dean of for 40 years (1561-1601).

During the English Civil War the castle survived an eleven-week siege, after which it was demolished by order of Parliament. The castle was rebuilt in the 19th century as a country house, and is now a luxury hotel, the Ruthin Castle Hotel (to distinguish it from the less expensive but still architecturally interesting Castle Hotel on ). From 1826 until 1921 the castle was the home of the Cornwallis-West family, members of Victorian and Edwardian high society - the Prince of Wales being a guest, as was the actress Mrs Patrick Campbell. George Cornwallis-West became the stepfather of Sir Winston Churchill, despite being only 17 days older than him, the antics at the castle no doubt causing some degree of scandal to the townsfolk at the time. George Cornwallis-West's sister, Mary-Theresa Olivia Cornwallis-West, became Daisy, Princess of Pless in .

The first House of Correction, or Bridewell, was built at the bottom of , next to the river, in 1654, to replace the House, where able-bodied idlers and the unemployed were sent to do work. Following John Howard's investigations into prison conditions the Denbighshire justices resolved to build a new model prison in Ruthin on the site of the old Bridewell. Work began in January 1775. In 1802 the prison had four cells for prisoners and nine rooms for debtors. The prison was enlarged in 1802, 1812, 1824-5, and 1837, by which time it could hold 37 inmates.

The Prisons Act of 1865 set new standards for the design of prisons — as the Ruthin County Gaol did not meet the standards plans were drawn up for a new four-storey wing, and the new prison accommodating up to 100 prisoners, in the style of London's Pentonville Prison was built at a cost of £12,000. On the Gaol became HM Prison Ruthin, covering the counties of Denbighshire, Flintshire, and Merionethshire. As far as is known, only one person was ever executed in the prison, William Hughes of Denbigh, aged 42, who was hanged on 17 February 1903 for the murder of his wife, his plea of insanity having failed.

Another colourful prison personality was John Jones, known as Coch Bach y Bala – the little redhead from Bala, who was a kleptomaniac and poacher who had spent more than half his 60 years in all the prisons of north Wales and many in England; he twice escaped from Ruthin Gaol, first on 30 November 1879 when he walked out of prison with three others while the staff were having supper — a £5 reward was offered for his capture, which happened the following 3 January. On 30 September 1913 he tunnelled out of his cell and using a rope made out of his bedding he climbed over the roof of the chapel and kitchen and got over the wall; after seven days living rough on the Nantclwyd Estate several miles away, Jones was shot in the leg by one of his pursuers, 19 year old Reginald Jones-Bateman. Jones died of shock and blood loss, while Jones-Bateman was charged with manslaughter, though the charges were subsequently dropped.

Ruthin Gaol ceased to be a prison in 1916 when the prisoners and guards were transferred to . The County Council bought the buildings in 1926 and used part of them for offices, the county archives, and the town library. During the Second World War the prison buildings were used as a munitions factory, before being handed back to the County Council afterwards, when it was the headquarters of the Denbighshire Library Service. In 2002 the Gaol was extensively renovated and reopened as a museum.

The first copies of the Welsh national anthem, Hen Wlad Fy Nhadau, were printed in what is now the Siop Nain tea and gift shop on .

In 1863 the Vale of Clwyd Railway (subsequently part of the and North Western Railway, the , and Scottish Railway, and British Rail) reached the town — the route ran from Rhyl on the north coast, through Denbigh, and Ruthin to Corwen where the line joined a route from Ruabon through Llangollen, Corwen, and Bala to Barmouth. The railway closed in 1963 as part of the Beeching Axe, although services between Ruthin and Corwen had been abandoned several years earlier following a landslip. The site of the town's railway station is now occupied by a large road roundabout (Briec Roundabout) and the Ruthin Craft Centre which opened in 1982, where there are 10 studios occupied by craftsmen who can be observed by tourists working at e.g. glass blowing, ceramic manufacture, painting, furniture restoration, etc. The Craft Centre is to be redeveloped from autumn 2006 in a £4.3 million scheme which will see it remodelled to contain six craft workshops, larger galleries and an expanded craft retail gallery, two residency studios, an education space and a tourist information centre, as well as a restaurant.

Sir Henry Haydn Jones MP (1863-1950) politician, slate quarry owner, and owner of the Talyllyn Railway was brought up in the town. He is immortalised for children as Sir Haydn, owner of the Skarloey Railway in Rev. W. Awdry's Railway Series.

On Wadysaw Raczkiewicz, the first president of the Polish government in exile, died in Ruthin. He was buried in the in , Nottinghamshire.

The town's principal educational establishment is Ysgol Brynhyfryd (), the local comprehensive school for 11-18 year olds. It was founded in 1898 as for Girls (the town's boys travelling five miles by train to , and vice versa). The school went co-educational with feeder junior schools up to around six miles away in 1938 under the English form of its name, but it has generally been known by the Welsh form of its name since the mid 1970s.

The school underwent significant phases of building work in the 1950s, early 1970s (when the number of pupils increased from 700 to 1000 in a few years, when the minimum school leaving age was raised from 15 to 16), and 2001-2 before which it had a record breaking number of mobile classrooms. The school's sports facilities including the swimming pool are used as the town's Leisure Centre, and it also features a theatre and arts complex, Theatr John Ambrose, named after the much respected late headmaster of the school in the 1980s and 1990s, which was opened by the actor Rhys Ifans (Notting Hill, etc.) a former pupil of Ysgol Maes Garmon in Mold, but brought up in Ruthin. Brynhyfryd caused controversy in recent years with the introduction of the Welsh Baccalureate.

On Ruthin hosted the Annual General Meeting of the International Football Association Board, the body which determines the Laws of the Game of the world's most popular sport.