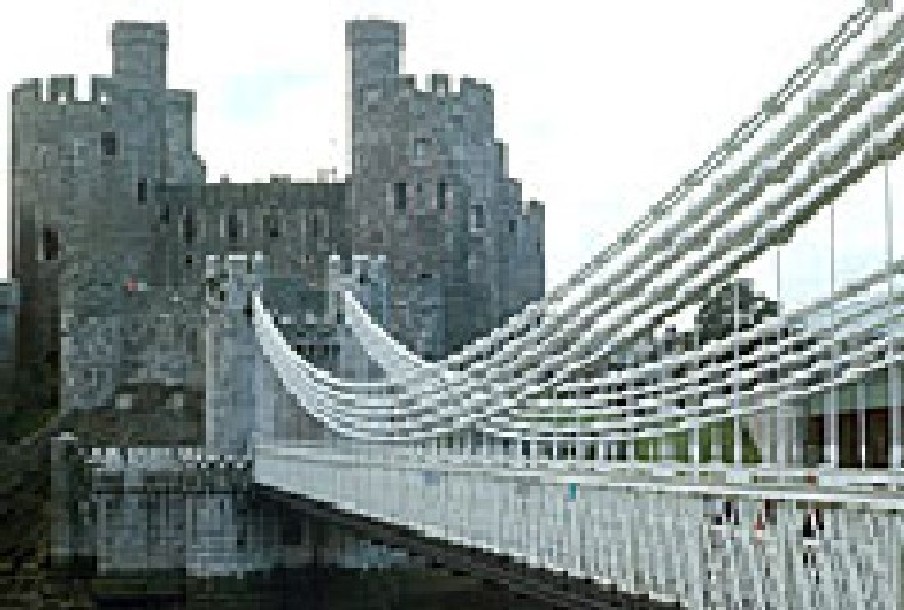 the . Built by the famous

in 1826 when it replaced the ferry over the river.

was one of several that English king Edward I (1272 -1397) to bring under the control of the English Crown. Conwy Castle was begun in 1283, the same year as Caernarfon and .

The building has a dual-wall structure like a concentric castle, but it actually has more of a linear structure, being rectangular and built on a rock outcrop.

It was built to be compact but immensely strong. Four towers were positioned on each of the two high, thick walls, and a further wall extended to enclose the town.

The building work cost Edward I's state £15,000 - but was immensely valuable in securing the area for the Norman monarchy. Indeed, it was as soon as 1295 that it was called upon to defend King Edward I against the rebellion of Madog ap Llywelyn.

In 1399 it was at Conwy that Henry Bolingbroke (who became Henry IV) arranged to meet King Richard II had arrested him, precipitating the rebellion of Owain Glyndwr.

Four years later, Glyndwr's forces took the castle in 1403 (although through trickery rather than military strength) before ransoming it back to the crown.

After the early part of the 15th century, saw little more military action, save for the Civil War. Archbishop of John Williams, a Royalist, repaired the castle but it was swiftly taken by the Parliamentary forces in 1646. After the war, the third Earl of Conwy stripped the castle and decamped to , and the castle was allowed to fall into disrepair.

Despite the lack of use is very well preserved, regularly repaired, and retains its majestic appearance