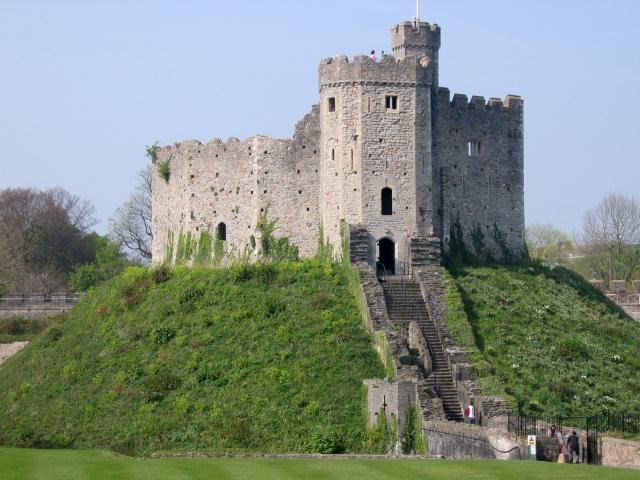 There were three successive Roman forts on the site of , most notably a late 3rd century structure, some walls of which can still be seen today. One of the gates was reconstructed in Victorian times.

Castle was built for Robert Fitzhamon in 1091, on the site of and incorporating some walls of the previous Roman fort, although it was mostly of timber in the usual motte and bailey style. His son-in-law, Robert of , rebuilt in stone, including the twelve-sided keep which can still be seen today. Robert, Duke of Normandy who was imprisoned there by his younger brother, King Henry I from 1106 until 1134. In 1158 it was the scene for a daring kidnapping carried out by one Ifor Bach (Ivor the Little). In the Welsh Revolt of 1183, the castle was attacked and much damaged, but an expected siege nearly a hundred years later, during the reign of Llywelyn the Last, never emerged. Gilbert de Clare had refortified many of the defences in readiness.

The Despenser family held the castle throughout the 14th century. In 1317, Llywelyn Bren was imprisoned there for revolting against the English and executed in a most humiliating manner. Four years later, the castle was taken by a combined force of marcher lords attempting to overthrow King Edward II. okDuring Owain Glynd?r's rebellion in the early 1400's his supporters took the castle in 1404 and set the town alight (a pub is named in memory of Glyndwr). Later it came into the possession of the Beauchamp Earls of , who built the living quarters along the western wall including the . King Henry VII gave it to his uncle, Jasper Tudor in 1488. By 1550, the castle was held by the Herberts who added further embellishments. They held the castle for the King during the Civil War, but it was eventually taken by Parliamentary forces. In 1776, it passed to the Earl of . The family made various alterations, including landscaping by Capability Brown.

In the early 19th century the castle was enlarged and refashioned in an early Gothic Revival style for John Crichton-Stuart, 2nd Marquess of by Henry Holland. But its transformation began in 1868 when the 3rd Marquess commissioned William Burges to undertake a massive rebuilding which turned the castle into a 19th century fantasy of a medieval palace, with a series of rooms that, perhaps, constitute the highest achievement of later Victorian Gothic Revival design. The coming together of the Marquess, enormously rich, early Catholic convert and steeped in a romantic vision of the mediaeval world and Burges, pre-eminent art-architect, committed Goth and hugely-talented designer forged one of the great patron/architect relationships and led to a succession of dazzling architectural triumphs of which Cardiff Castle is the greatest of all.

Rebuilding began with the Clock Tower, planned 1866-1868 and begun in 1869. The towers continue westward, the Tank Tower, the Guest Tower, the Herbert Tower and the Beauchamp Tower, part Burges, part Holland, part 15th and 16th century, creating a skyline, best observed from Bute Park, that echoes Burges' unbuilt design for the Law Courts and presents a visually-stunning image of a mediaeval city.

Within the Castle, the succession of sumptuous apartments; the Winter and Summer Smoking Rooms, the Chaucer Room, the Arab Room, Lord Bute's Bedroom, the Roof Garden, repeatedly illustrates Burges' supreme skill as an art-architect. Taking complete control of the designing, the building, the decoration and the furnishing of the apartments, and using his favoured team of Nicholls, Crace, Lonsdale, Burges created a suite of rooms in a unique Gothic Revival style that is unrivalled.

The castle was later sold to the city of by the family in 1947 for £1. It is now a popular tourist attraction, and houses a regimental museum in addition to the ruins of the old castle and the Victorian reconstruction. It sits in the expansive grounds of .

The castle has hosted a number of rock concerts and performances and has the capacity to accommodate over 10,000 people. Notable concerts include the Stereophonics Live at in June 1998 and Green Day in 2000. In 1948 a crowd of 16,000, a record for British Baseball game, watched defeat in grounds. plays host to 's Summer Ball each year. It is also the site of ' largest Mardi Gras held every August.